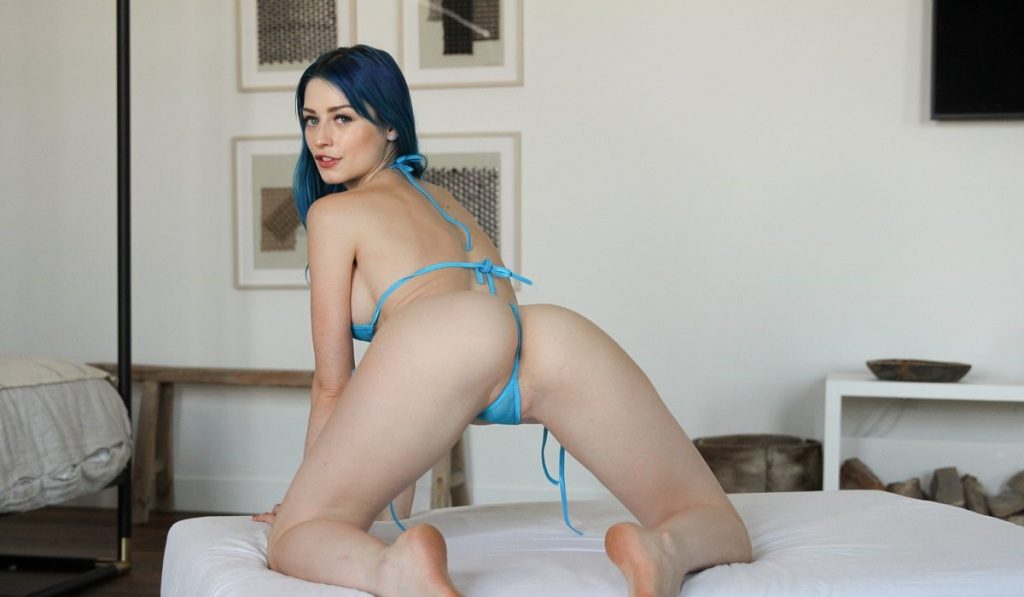 Jewelz Blu: The Blue Mermaid of Your Dreams

For those who aren’t familiar with this bombastic chick, now’s your chance to be amazed by her beauty.

Who is Jewelz Blu?

Jewelz is one of those adult stars who originally came from Germany. She was born on the 21st of September 1994, and her star sign is Virgo.

In 2006, she left Germany and moved to the US. I heard that she’s now living in Orange County, California.

She’s the kind of vixen that can bring your fantasies to life. Her appearance would make you feel like you’re in a fantasy movie. She got natural blue eyes, blue hair (dyed), and an adorable face. In my opinion, she’s this generation’s version of Helen of Troy— you know, the face that launched a thousand ships.

However, in her case, her drool-worthy physique can enrage a thousand dicks — or maybe even more! I think that’s possible as she has many avid followers worldwide.

Jewelz loves calling herself the “blue mermaid.” And that’s precisely the reason why she used “Blu” as her second name. It’s quite evident it’s her favorite color.

Aside from this blue-haired babe having a beautiful face, she also got the whistle-bait curves to go with her slender figure. She got round orbs the size of 32C. And what’s excellent with them is you can’t tell they’re enhanced.

I guess one of her secrets for having a jaw-dropping body is her workout routine. Jewelz makes sure she goes to the gym every day to make her spankable booty even more insanely hot!

Anyway, she’s not just a pretty face and a bang-worthy body — she’s so much more! She is a hard-working student who worked two jobs to pay for her tuition. She worked at a juice bar and a grocery store.

Oh, wait — have I mentioned that she was also creating her content on ManyVids? Well, what can I say? She’s truly a talented bombshell, and everyone should watch out for her!

Jewelz officially entered the pornography world in 2019. She was so eager to succeed that she decided to up her game after just a few months of camming and solo filming.

You might love to check out some scenes like the “Shoplyfter” with Wrex Oliver in July 2019 and Daughter Swap’s “A Secret Nude Daughter Party,” a group shoot with Stirling Cooper, Brad Newman, and Kate Bloom in August 2019.

It seems like a typical scene, right? Well, you might change your mind when you see her go in public and her stepbrother pushes the button whenever he pleases.

Jewelz tries to act as normal as possible while she struts around with that vibrating sex toy inside her luscious pussy hole. By the look of her face, you can notice she’s trying so hard not to moan.

Luckily for her, she was able to orgasm without getting caught. That’s freaking wild, don’t you think?

All she wants is to be dominated, as it’s one of her biggest turn-ons. Jewelz even added that it’s one of the fantasies she’s yet to live.

Do you need more to spice up your fapping session tonight?

Let’s end this article with these stunning nude shots, shall we?

Now that you’re acquainted (in a way) with our blue-haired goddess, it’s time to fap the blues away!

If you want more, you can check out this ravishing Russian bombshell!